Amazon and John Lewis lead the list of the best brands for customer service, a list dominated by retail brands, according to the fourth annual study by service design consultancy Engine.

Marks & Spencer, Tesco and Sainsbury’s complete a clean sweep by retail of the top five brands for customer service in the study of customer attitudes to the best brands and sectors, as well as what makes for a good customer experience. 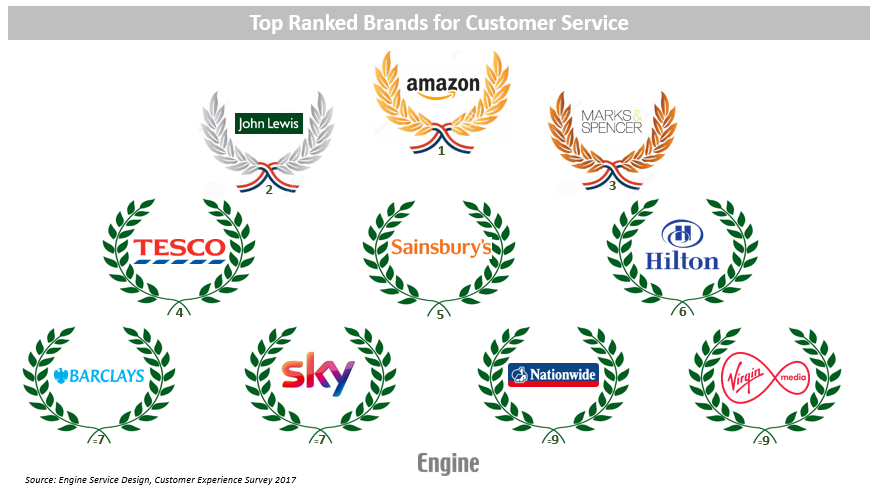 “Amazon is taking the customer experience to a whole new level, continually rolling out new business models – be it Prime, Prime Wardrobe, Alexa and Echo, Amazon Fresh or the Dash ordering button – to deliver customers the things they want as quickly as possible,” said Engine’s co-founder Joe Heapy. “Although a much more traditional brand, John Lewis keeps upping its game too, be it instore iPhone apps, a dedicated Smart Home space or a new “experiential” store including a beauty spa, travel agent and community room.”

Although retail dominates the list of best brands, as a sector it only ranks third (cited by 40% of respondents), behind restaurants (47%) and hotels (46%). Retail suffered a 1.7 percentage point drop in the proportion of people citing it as one of the best sectors for service – the fourth biggest fall among the 14 sectors covered.

“It’s a small but directionally important change as retail generally does a pretty good job of customer service but it needs to be careful about letting standards slip, particularly as people become more demanding due to the improving service they get in other sectors,” said Heapy.“Remember, people aren’t asking the earth. The three things they value most when dealing with a company are honesty, efficiency and reliability – and it’s been these three consistently for the last four years of the study.”

The study also revealed that consumers are more than twice as likely to recommend a company or brand based on the quality of service (66%) than they are on price (31%). Heapy notes this is a “reassuring reminder for retailers who are worried about competing on price. Quality is far more important.”

At the other end of the spectrum, public transport (cited by 38%), utilities (37%) and broadband/media (33%) are regarded as the worst sectors for customer service.