‘Buster the Boxer’ is John Lewis’ most emotionally engaging festive ad, according to Realeyes.

The results are based on facial recognition technology which measured people’s reactions as they watched the ads:

“Initial industry opinion seems to be that Buster isn’t a ‘rockstar’ edition from John Lewis but consumer’s emotional reaction says otherwise – it’s more engaging than their previous five offerings,” says Mihkel Jaatma, Realeyes’ CEO. “Its success is very much driven by happiness, a significant departure from last year’s melancholic Man on the Moon which even John Lewis admitted may have been too sad.”

Emotion measurement firm Realeyes measured the reactions of 1,700 people across 49 key facial points as they watched the ads via their webcam. The respondents were sourced by audience platform Lucid. 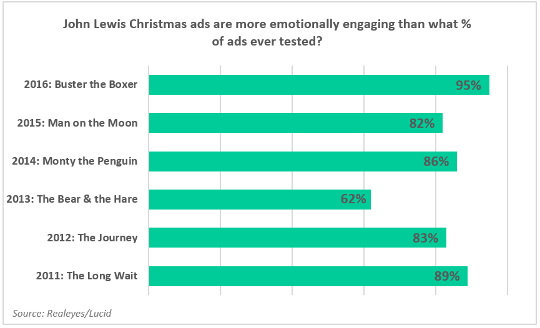