UK consumer confidence has fallen for the first time since 2013, according to the latest Nielsen Global Survey of Consumer Confidence and Spending Intentions.

The UK Consumer Confidence Index dipped two points to 101 in Q4 2015, from 103 in Q3. In contrast, confidence across Europe as a whole increased four points to 81. A score over 100 indicates degrees of optimism, below 100, degrees of pessimism.

Terrorism and immigration are currently the two biggest concerns among UK consumers. The latest results show terrorism anxiety has hit its highest-ever level, with 32% of UK consumers citing it as their biggest or second-biggest concern – more than double the level a year earlier (13%). Immigration concerns have increased 5 percentage points over the same period to 22%. 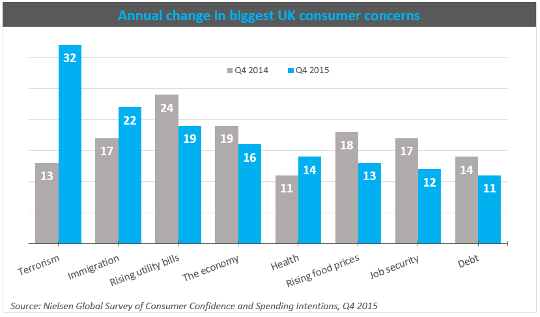 “Consumer concerns about terrorism and immigration have risen considerably. We’re closely watching for any effects these demographic and political issues may eventually have on consumer spending,” says Nielsen UK & Ireland managing director Steve Smith. “In general, big and unexpected events would likely be the most disruptive for consumers.”

Financial concerns drop across the board
In contrast, over the course of 2015, concerns about rising utility bills, rising food prices, the economy, job security and debt all fell.

The number of UK consumers feeling positive about making purchases has hit 52%, rising above the 50% mark for the first time since the question first appeared in the survey nearly ten years ago (Q3, 2006).

Those reporting they’ve changed spending habits to save money dropped to 50% – the lowest level since the question first appeared nearly seven years ago (Q1, 2009).

“For the first time, our study shows the majority of UK consumers are now feeling positive about spending,” explains Smith. “A succession of favourable factors – such as a glut of retail promotions, falling fuel prices and a supermarket price war – is helping to make our money go further, leaving more to spend on non-essentials such as leisure and entertainment.”

How the UK compares
The global Consumer Confidence Index now stands at 97. The UK is Europe’s second most confident country, behind Denmark (110). India (131) has the highest score globally, South Korea the lowest (46).

The scores are derived from Nielsen’s study, established in 2005, which measures attitudes each quarter on topics including personal finances and job prospects among 30,000+ internet consumers in 61 countries. Consumer confidence increased in 26 (43%) of these markets.

To view historical trends for all countries, broken down by metrics such as financial concerns and job prospects, visit the interactive Nielsen Global Consumer Confidence Trend Tracker.