Sales volumes of fast-moving consumer goods (FMCG) are on the rise as consumers in Europe take advantage of historically sluggish price rises, according to Nielsen European retail performance data. For the seventh consecutive quarter, sales volumes of products like food, drinks and toiletries increased year-on-year.
In the fourth quarter of 2015, volumes rose 0.8% year-on-year, while sales values rose just 1.3%, the lowest increase since Q3 2010 (1.1%). Consequently, retailers saw a 2.1% increase in their takings at the till.

Across the 21 European countries measured, sales values fell sharpest in Switzerland (-1.6% year-on-year) and Portugal (-1.3%). A further four markets – Finland, Ireland, Germany and the Czech Republic – also experienced value deflation. At the other end of the scale, the highest rises were in Turkey (+9.2%) and Hungary (+3.1%).

“Sales values are being kept in check by a combination of things,” said Nielsen’s European director of retail insights Jean-Jacques Vandenheede. “Production costs are falling thanks to lower oil prices, and retailers are still employing heavy promotional activity to combat the increased popularity of the discounters. Furthermore, almost three in ten Europeans are switching to cheaper grocery brands to save money.” 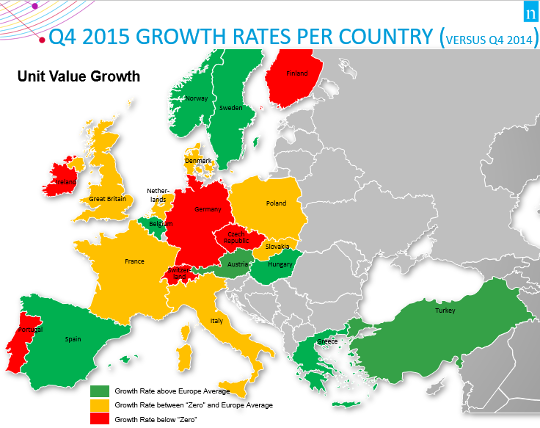 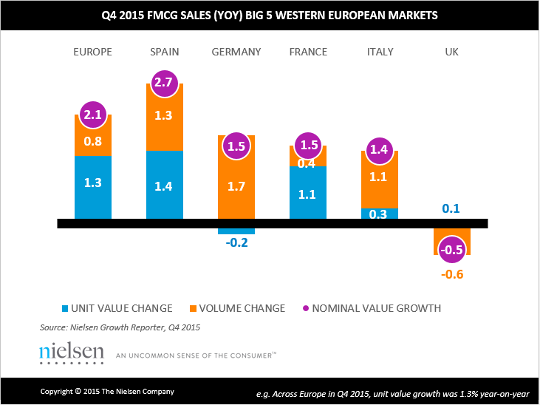