The amount consumers across Europe spent on everyday items, such as food, drinks and toiletries, rose by its highest level for a year, according to Nielsen retail performance data released today.

In the final quarter of 2016, grocery retailers across the 21 European countries measured saw a 1.8% year-on-year increase in takings at the till for fast-moving consumer goods (FMCGs) – the highest growth since the end of 2015. This 1.8% increase was a combination of a 0.9%increase in prices paid and a 0.8% rise in the volume purchased.

Value of European shopping basket up 41% in a decade
In 2016, the value of the European FMCG shopping basket was 41% higher than in 2006, while the amount of goods purchased has increased 11%. In that time, Turkey has seen the highest rise among the 21 countries – tripling over the decade – whilst Greece was the only one to see a decline (-11%) since 2006.

“The value of the shopping basket has increased due to a number of factors including inflationary price rises, people buying more goods and changing their product mix by swapping in more premium and fresh foods,” explains Olivier Deschamps, senior vice president retailer Services Europe. Spain’s growth rate (+3.6%) was the highest among the big five western European markets, followed by Italy (+1.6%). Germany had the lowest growth among this group (+0.3%), and the fourth lowest among all 21 countries. 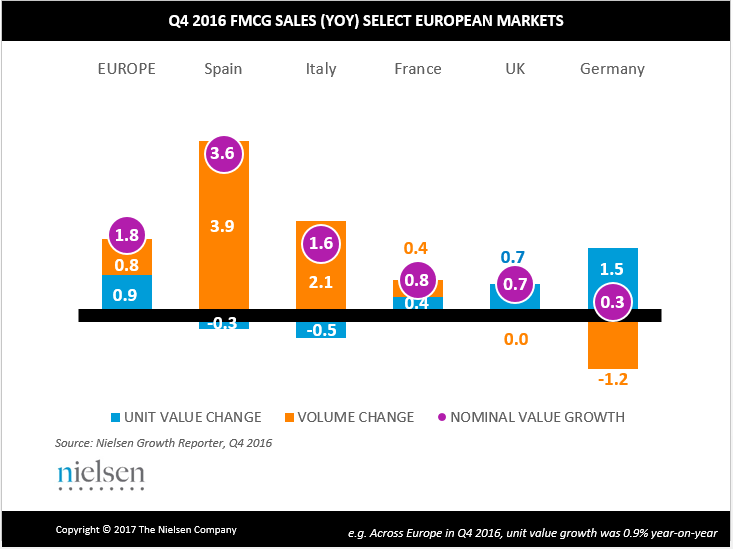 “After the weak start to 2016, when sales growths slowed, it was a stronger end to the year for the food retail industry,” says Deschamps. “Although consumer confidence held steady it remained low and growths in 2016 were generally lower than previous years with volume growth at its lowest since 2013. Things improved in the second half of the year, mainly driven by Central European countries and IBERIA.

“In contrast, Western Europe saw little momentum in volume sales, alongside unit value deflation in Spain and Italy and low inflation in France and the UK.”