The amount consumers across Europe spent on everyday items, such as food, drinks and toiletries, rose by 3.7% in the second quarter of 2017 – the highest level for three years.

Nielsen data on grocery retailers across 21 European countries shows that this 3.7% year-on-year increase in takings at the tills for fast-moving consumer goods (FMCGs) reflected a 2.0%increase in the prices shoppers paid and a 1.7% rise in the volume of items they bought.

“This more buoyant FMCG market across Europe is a reflection of four key factors,” said Olivier Deschamps, Senior Vice President Retailer Services Europe. “Improving economic conditions, particularly in the likes of France and Spain, falling unemployment in a number of countries, consumer confidence rising to its highest level in years as well as inflation remaining under control. The timing of Easter also played a bit-part role but the dashboards are all green at the moment.” ​
Italy’s growth rate (+4.0%) was the highest among the big five western European markets, followed by France (+3.2%). Germany had the lowest growth among this group (+2.3%), and the fifth lowest among all 21 countries. 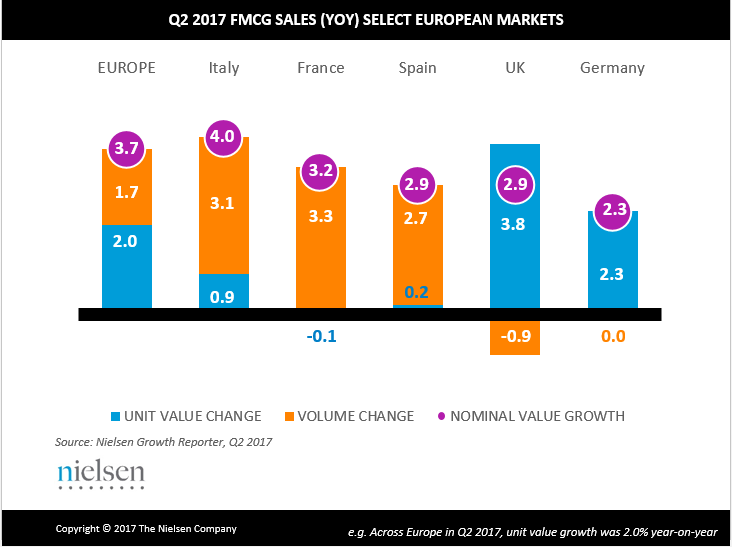 Deschamps concludes: “With GDP growth across Europe projected to remain at around 1¾ per cent in 2017 and, assuming no major political or economic shocks over the next six months, the outlook for the grocery market for the rest of year is a continuation of Southern Europe’s sales recovery and Northern Europe’s volume growth.”