Harvey Nichols and Kwik Fit produced the most engaging Christmas ads by high street retailers, according to Realeyes’ annual Christmas study, which measures how people feel while they watch ads by tracking their facial expressions.

John Lewis – last year’s winner with “Monty the Penguin” – could only muster 7th spot with “Man on the Moon”, just behind Aldi’s “Telescope” spoof of it.

Almost 1,500 people agreed to have their faces measured via their own computer webcam so Realeyes, which was founded at Oxford University, could determine their emotional reactions to 30 Christmas ads from leading high-street and household brands. In total, the research incorporated over 11.5m frames of facial expressions.

Harvey Nichols’ “Avoid Gift Face”, about a woman trying to look pleased when getting unwanted gifts, and Kwik Fit’s Santa surprising children whilst getting his sleigh fixed, both scored in the all-time top 9% of ads ever measured by Realeyes in terms of emotional engagement. This is a combined measure of how well the ad grabs viewers’ attention, keeps it and leaves a lasting impression. 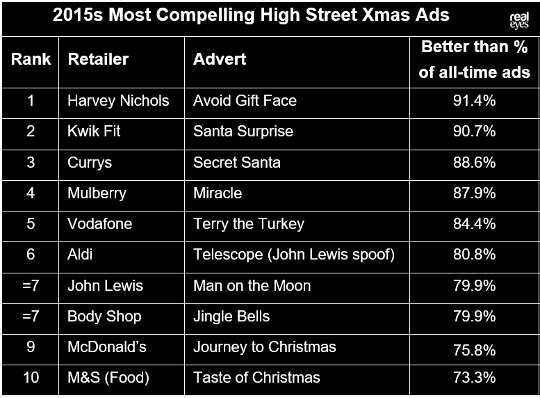 e.g. Harvey Nichols’ ad scored better than 91.4% of ads ever measured by Realeyes
Currys’ ‘Spare the Act: Secret Santa’ featuring actor Jeff Goldblum – playing on an almost identical theme to Harvey Nichols in teaching people to act happy when getting unwanted presents – followed closely behind in 3rd spot (top 11% all-time) ahead of Mulberry’s “Miracle” which plays on the traditional nativity scene by having a woman visited by shepherds and kings when receiving a handbag.

“John Lewis remains the undisputed champion for publicity and hype but in terms of connecting emotionally with consumers, many brands outdid them this year,” said Realeyes’ CEO Mihkel Jäätma. “John Lewis’ ads have become increasingly out of this world and fantasy-based, consequently, they’re becoming harder to identify with. We’re seeing a move away from the kind of heavy-handed emotional approach. Harvey Nichols, Kwik Fit and Currys did brilliantly because it was about situations we’ve all been in – putting a brave face on disappointing gifts or seeing children’s reactions on meeting Santa.”

Harvey Nichols was the only Christmas ad this year to achieve 10 out of 10 on any of the four metrics that measure the overall “EmotionAll” score – doing so for both retention and engagement. It scored 4 on attraction and 9 on impact. Last year, the retailer was runner up to “Monty the Penguin” with “Could I Be Any Clearer” which featured people giving Christmas cards explaining what presents they wanted.

“The barometer of a successful ad shouldn’t just be whether people like and share it, but also whether it actually makes them spend money – ads that connect emotionally with people are more likely to make this happen,” explains Jäätma. “The four key tips to doing so are to hook the audience early, retain their attention, invoke a reaction – the stronger the better – and finish with impact. Humour was a big tool this year, all the top 10, except John Lewis and M&S, used it to connect with viewers.”

Harvey Nichols’ 2013 Christmas ad, “Sorry, I spent it on myself” remains the most engaging festive ad ever. It scored in the top 3% of ads ever measured by Realeyes, whose emotion measurement technology enables marketers to make better decisions across the three key stages of video advertising – testing the creative, planning media spend and analysing the performance.

The full scores for all ads tested including the links to the top 10 are available here.