Almost 50% of UK households buying groceries are now visiting Aldi or Lidl every month, helping the discounters to continue gaining market share at the expense of the major supermarkets – according to the latest data from global information and insights company Nielsen.

“Sales at both Aldi and Lidl continue to increase by more than 20% year-on-year,” said Nielsen’s UK head of retailer and business insight Mike Watkins. “These discounters are attracting new shoppers by opening new stores and using ads that communicate not just value, but quality and freshness too. Discounters now attract nearly one in two shoppers every four weeks and look set to gain significant increases in market share for the third consecutive Christmas, as they become a bigger part of shoppers’ Christmas repertoire.”

Sainsbury’s was, once again, the best performing of the top four supermarkets, and the only one to record a year-on-year increase in sales (0.1%). It has progressed by attracting new shoppers and increasing shopper spend per visit. 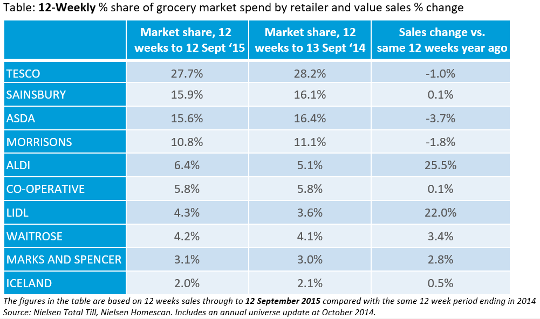 The overall market
Sales volumes rose 0.3% during the four weeks ending 12 September 2015, versus the same period a year ago – the ninth year-on-year rise in the last 10 reporting periods. There was no year-on-year change (0.0%) in sales value at the tills.

“Supermarkets continue to see deflation in key categories such as fresh and chilled foods, bakery and packaged grocery,” notes Watkins. “However, volume growth in snacks, confectionery and drinks continues, which shows the importance of strong branded promotions in driving sales. There’s also volume growth in fruit and vegetables, which reflects the fact that many prices are lower than a year ago – encouraging shoppers to buy more.”