Despite the fact that sales of groceries are growing at a much quicker rate online than they are in stores, online remains a very small part of the UK grocery market, according to Nielsen retail data released today.

“Despite the hype and attention given to online and its ability to change the way people shop, the reality seems rather different,” says Aylin Ceylan, Nielsen’s analytics business partner.“Although online spend increased by around £300m last year, a 0.1% rise in market share is a rather pedestrian rate. Many will be surprised it’s not faster but online shopping in grocery, unlike many other sectors, is much more a complementary option to stores not an ‘instead of’ option.”

Ceylan points to the fact that neither popularity nor basket size is an issue for the online grocery sector because “two-thirds of people who buy groceries do so online and the average online basket is around four times bigger than an in-store one.”

She says the issue is firmly a “frequency one.” On average, people buy groceries online less than once a month (11 ‘trips’ a year) compared to nearly 21 a month in-store (247 per year). 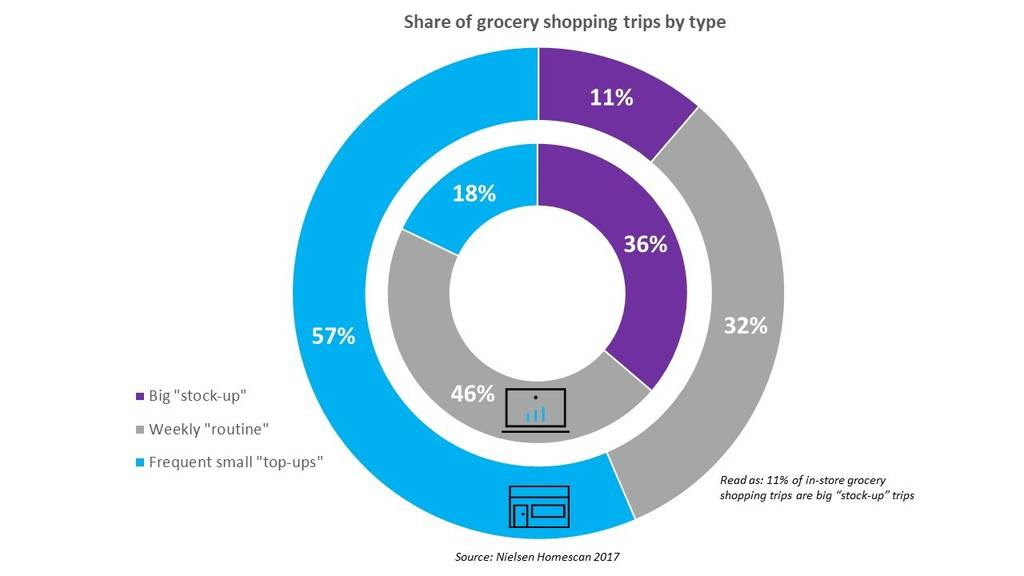 Click here for larger version of chart
Online’s focus on the bigger shops explains why products such as pet care, frozen foods, baby/ toddler and household/cleaning tend to make up a much bigger proportion of online baskets than in-store ones.

Delivery costs are often cited as a reason why online grocery shopping isn’t more popular, however, she notes that, “whilst free delivery would have the biggest impact on people shopping online, only one in four shoppers say delivery costs are actually a barrier to buying groceries online.”

Ceylan believes that online’s ability to grow its share rests on the range of business models popping up to help shoppers, particularly when it comes to convenience, “2018 may be a seismic year for online grocery with the rise of voice assistants from Google and Apple, the Dash button from Amazon, the extension of click & collect to more supermarkets all making it easier for shoppers, as well as online meal-kit and ‘box’ subscriptions such as Hello Fresh and Graze offering new purchasing opportunities.”