With Black Friday and Cyber Monday done for another year, both retailers and shoppers have well and truly turned their attention to the festive season. New Christmas trading analysis from PwC shows UK shoppers are preparing to spend an average of £420 on Christmas presents this year. Those in the 35-44 year age bracket are going to shell out the most (£522), and shoppers in Scotland will have the  highest average spend (£454) of all the UK regions. 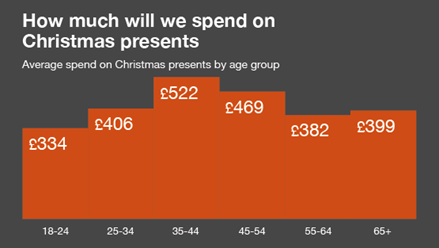 Lisa Hooker, Consumer Markets Leader at PwC, said:  “2018 has been full of commentary about squeezed consumer spending and its contribution to the obvious distress on the UK high street. The first half of the year in particular was very tough, with inflation rising about earnings. But, there should be some Christmas cheer for retailers as we close off 2018 – our research shows that people will be hitting the shops in earnest this Christmas time. Overall, spending levels will be similar to last year, but what people spend their money on may be different – it looks as though more money is being spent on the essentials – Christmas dinner, food and drink, and children’s clothing.

“Alongside one-off Christmas spending, there are a number of promising signs the doom and gloom for consumers is letting up. Absolute pay is growing faster than inflation and our consumer sentiment survey found that marginally more people think they will be better off in the coming year than worse off. It’s tentative, but promising.”

According to respondents, one in five consumers claim to have started their Christmas shopping earlier this year with the figure rising for under 35s in particular (over 30%). Twenty percent of consumers say they did most of their Christmas shopping over the Black Friday/Cyber Monday weekend. Although the most popular time for buying Christmas presents is early-to-mid December, 6% of respondents, the vast majority of whom were men, say they intend to shop the week before Christmas because they have no time before then.

When asked what they’ll be prioritising when it comes to spending money this Christmas, shoppers told us they would be spending more on food and drink, Christmas dinner, and children’s clothing. The main categories where shoppers will spend less on presents include adult clothing and electricals and technology, which were the two most popular categories of spending in the Black Friday sales.

Kien Tan, retail strategy director at PwC, said: “With Christmas Day falling on a Tuesday this year, we believe that retailers may have a bumper shopping weekend as consumers will have a full weekend to make last minute purchases. We could even seen an increase in high street footfall that weekend, which makes a change to the last few Christmases.

“With people saying they would spend more on electricals and fashion over Black Friday, it’s no surprise that those are the two categories cited as the lowest priorities for Christmas itself. Black Friday seems to have become the main period for indulgence, fun and self-gifting, while Christmas has reverted to its more virtuous roots.”

Sustainability has emerged as a key consumer trend of 2018 and set to play a key role this Christmas. The scale of consumer interest in the topic has taken some in the industry by surprise. Already this Christmas, one of the most talked about advertising campaigns has been around the impact of palm oil on rainforests. If current trends are anything to go by, other single issue campaigns are likely to emerge in the coming months, for which retailers need to be prepared.

Hooker, said: “We believe the rising importance of sustainability will affect both where consumers shop and how they buy. We have seen retailers who have been on the front foot on this see improvements in consumer awareness and favourability towards their brand.

“Secondly, there has been an increase in popularity of more sustainable buying choices, particularly amongst the young, with products from collectable toys to vegan leather and ethical beauty products that reflect the growing importance of the circular economy.”

With the bulk of shopping activity set to take place online, retailers and logistics providers have been rapidly improving on their delivery offerings. Nevertheless, consumers are taking no chances on potentially missing home deliveries and ‘click and collect’ deliveries are expected to grow at twice the rate of normal deliveries with the options available to consumers growing even faster. Not just deliveries to retailers’ own stores, but also to secure lockers, manned collection points and even to competitor retailers.

Tan, continued:  “As the popularity of click and collect grows, some high street retailers are even encouraging store-based click and collect, either by offering free or cheaper in-store collection to drive add-on sales, or by hosting third party collections to drive new customer football.

“Right now, click and collect accounts for one-sixth of the overall online delivery market. But whether its increased popularity will be enough to reverse the decline in the high street footfall remains to be seen.”