Continuing deflation and the enduring growth of the discounters outweighed any bounce from the Rugby World Cup, as the UK’s major supermarkets suffered a rare fall in both sales value and volume – according to the latest data from global information and insights company Nielsen.

During the four weeks ending 10 October 2015, sales value at the tills dropped -1.0%¹ versus the same period a year ago – while volumes declined -0.1%. This is only the second time in the last 11 four-week periods that both metrics have declined.

“Deflation, discounters and weak volume growths have meant a challenging four weeks for the supermarkets – despite the relatively warm weather and the Rugby World Cup,” said Nielsen’s UK head of retailer and business insight Mike Watkins. “Whilst lower food prices are good news for shoppers, they result in falling spend per visit across the industry which doesn’t benefit retailers who have the same level of fixed and operational costs.”

The average spend per visit in the latest four-week period dropped 3.3% year-on-year to £17.23.

Aldi and Lidl see major surges in growth
Aldi continued their strong growth in year-on-year sales (27.6%) during the 12 weeks ending 10 October, as did Lidl (up 23.3%). Watkins comments: “The other supermarkets will be particularly disappointed that discounter growth shows little sign of slowing – Aldi’s year-on-year rise was their highest in nearly 18 months whilst Lidl’s was their highest in nearly a year.”

Sainsbury’s was the only top-four supermarket not to see a decrease in year-on-year sales (albeit flat at 0.0%) whilst Asda continued to be the weakest performer among the entire top 10 (down 4.2%).

Aside from the discounters, Marks & Spencer had the highest growth in year-on-year sales (3.0%) whilst Waitrose had the largest increase in new shoppers (2.1%). 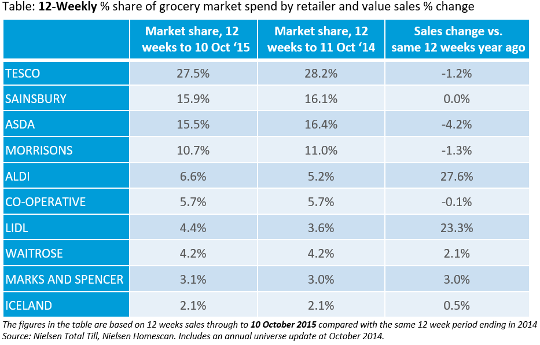 Watkins notes: “Perhaps, more than ever, the retailers will be looking forward to the start of Christmas promotions in a couple of weeks to turn things around. We can expect branded price cuts, brand price guarantees and strong promotions, as all the major players search for that important point of difference in consumers’ eyes.”