The volume of items purchased from the UK’s leading supermarkets decreased year-on-year for the fifth consecutive month – according to global information and insights company Nielsen.

“Half of consumers are changing their spending habits to save money, including chasing price cuts around different stores,” said Mike Watkins, Nielsen’s UK head of retailer and business insight. “This promiscuity is characterised by consumers shopping more often at more places while buying less, and that’s hurting supermarket performance. Asda, in particular, is being impacted by this disloyalty as low prices are no longer a clear differentiator when so many supermarkets price match.”

How the individual retailers performed

Sainsbury’s was the only top-four supermarket to see an increase (0.2%) in year-on-year sales. 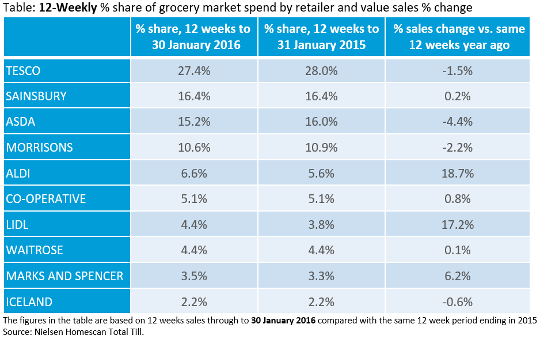 Watkins said: “Sainsbury’s are the top four’s best performer and are successfully attracting new shoppers without being as reliant on promotions as last year or compared to other retailers. In contrast, promotional activity increased at Waitrose in the last four weeks at the same time as sales slowed. Across the market, the proportion of sales purchased on promotion fell again to under 31%.”

Although most grocery retailers attracted new shoppers in January, Watkins notes: “In reality these will be less valuable shoppers, spending less per visit than regular, loyal, shoppers. The challenge is how individual retailers can differentiate themselves to get people to return again in February and spend more. The supermarkets need to up their game in this regard, as Aldi and Lidl have certainly been the most effective at doing this over the last two years.”