With consumers having delayed their main Christmas grocery shop, over £6.4bn is expected to be spent at the UK’s leading supermarkets in the two weeks to Christmas, according to global information and insights company Nielsen.

“Shoppers will leave it late this year – 60% are planning to do their main grocery shop in the week before Christmas,” said Mike Watkins, Nielsen’s UK head of retailer and business insight. “This could provide a welcome boost for grocery retailers, particularly with an extra weekday of trading before Christmas compared to last year. However, it’s the discounters which could make another leap in market share – a third of people are expecting to do their main Christmas shop at Aldi or Lidl.”

During the four weeks ending 5 December 2015, sales value at the tills dropped -1.0% versus the same period a year ago. With volumes declining -0.8%, it meant both metrics declined for the fourth time in the last five 4-week periods.

Watkins notes: “It’s been a very difficult year for the major supermarkets, driven by price deflation and compounded by having to respond to the discounters’ lower prices – even promotional activity around Black Friday did nothing to boost food sales.”

Asda’s struggles continue
For the 10th consecutive twelve-week period, Asda had the largest drop (-4.3%) in year-on-year sales among the top 10 supermarkets.

Sainsbury’s was the only top-four supermarket to see an increase (0.5%) in year-on-year sales. 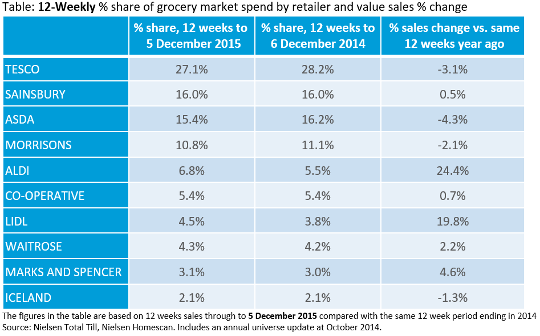 “The major supermarkets will have to raise their game in 2016 and be more creative when it comes to stemming the rise of the discounters who’ve become smarter and more aggressive in their marketing activity,” concludes Watkins. “A key tactic is to focus on why their shopping experience is superior, such as breadth of customer services and wider product ranges – as well as techniques such as cutting petrol prices, which encourages shoppers to visit larger supermarkets and out of town stores.”