The amount spent on UK online retail sites on Black Friday 2017 was up +11.7% to £1.39bn, according to data from IMRG. This was ahead of the original forecast of +9% growth for the day.

Of that spend, 39% was completed on a smartphone, with the device taking the highest share of sales against desktop and tablet. While this is not the first time this device has accounted for the highest share, it is unusual given Friday was a standard working day (people tend to use the device of most convenience, and many would have had access to their desktops at work).

This stronger-than-expected performance was achieved in spite of a number of factors that could have exerted a negative influence on growth: 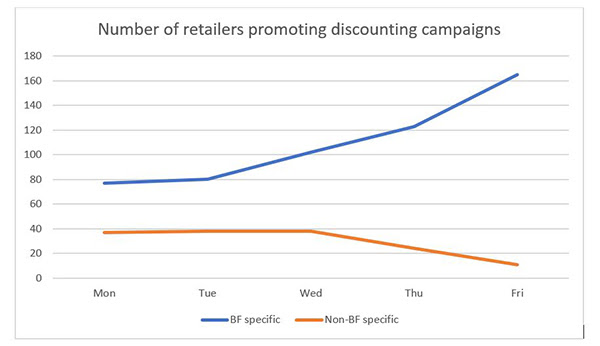 As can be seen – and as might be expected – the number running Black Fridayspecific campaigns peaked on the Friday at 168. However, at the beginning of the week there were already 77 actively promoting Black Friday campaigns (as well as 37 running their own discount campaigns), with that number increasing sharply on both Wednesday and Thursday. The Wednesday was particularly interesting, marking the day of the week when activity started to really accelerate as many switched on their campaigns – yet this was not reflected in the sales growth for that day, up just +2.8% and by far the lowest rate for any day that week; shoppers appeared to be far less responsive on that day.

Even on Monday 13 November, a full week before Black Friday week began, there were 12 Black Friday-specific and 66 non-specific discounting campaigns live among the 210 retailers tracked.