The UK’s beleaguered supermarkets received a welcome Christmas present as consumers spent £3.3bn during the week ending Boxing Day – 8% more than in the same period a year ago – according to global information and insights company Nielsen.

Supermarket sales during Christmas week were 43% higher than in an average week, when around £2.3 billion¹ is spent.

Mike Watkins, Nielsen’s UK head of retailer and business insight: “With Christmas falling a day later in the week than last year, shoppers had an extra opportunity to buy food and drink between the final pre-Christmas weekend and the big day itself. Consequently, sales accelerated as shoppers took advantage of the extra day to buy fresh foods, seasonal treats, gifts and indulgences.”

Overall, during the four weeks ending 2 January 2016, sales value was flat versus the same period a year ago, while volumes declined -0.2%.

However, discounters the big winners
During the final 12 weeks of the year, Aldi’s sales were up 20.6% year-on-year whilst Lidl’s were up 17.9%.

Watkins said: “The discounters saw a surge of new shoppers in December. However, there was a slowdown in the growth of their basket spend compared to Q3, indicating they’re not immune to a fightback from the Big Four.”

Watkins again: “The average price per item fell more at Aldi and Lidl than it did across the industry as a whole. So, whilst people are buying more items from the discounters,they’re actually saving money.” 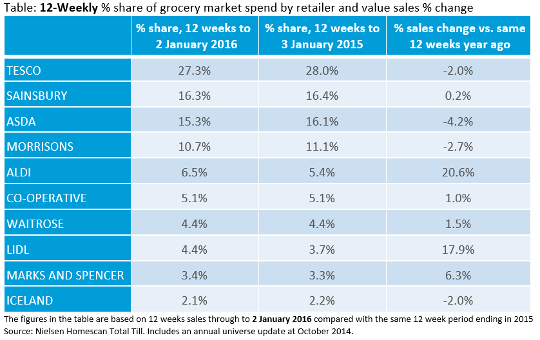 “Over Christmas, shoppers took advantage of some exceptional seasonal offers and price cuts. Meanwhile, most retailers were able to attract new shoppers – in particular, Aldi, Lidl, Sainsbury and Tesco,” said Watkins. “The percentage of sales purchased on promotion fell to 31% – the lowest for over five years. Furthermore, with deflation now likely to have reached its low point, and the intensity of promotions continuing to fall, the industry has a good chance of returning to positive growth in the first part of 2016.”